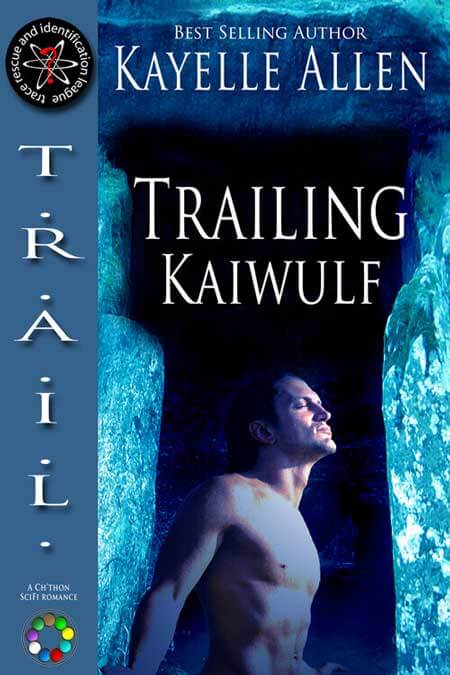 Trailing Kaiwulf is the first of a new series set in the Colonies of Man.

Travel to a godforsaken planet on the outskirts of space. Check. Hold intrusive military types at bay. Check. Find an invisible man in a different dimension. Check. Finish out the vacation TRAIL yanked you back from to do it? Easier said than done.
Ordered back from their first vacation in ages, Jee and Dane get handed a top priority mission. The pay is better than any they’ve earned before as agents for the Trace, Rescue, and Identification League. With this much money, they might not need jobs. They’re the best there is, and the item, person, or secret hasn’t been invented that these two can’t recover.
But locating this quarry might be a bit past even their considerable skills. After all, how do you find an invisible man in another dimension? And who, exactly, is footing a bill this steep? Certainly not the archaeologist in charge. The military wants to get involved, but they have no monetary stake either. So who — or what — is behind the request to trail Kaiwulf?

TRAIL stands for Trace, Rescue, and Identification League. Their detractors say it stands for Thieves, Ruffians, A–holes, Idiots, and Liars, among other things. A TRAIL agent learns early whether to pucker up or duck.

The agency operates within the Terran Crescent, and the Colonies of Man, but has been known to venture into outlying areas. In Trailing Kaiwulf, they visit the planet Ust, a forgotten backwater planet close to the remnants of the Barrier. The Barrier, a crumbling network of nav-scramblers set adrift in space, was originally designed to keep humans on this side of the galaxy, and the non-human genetically altered (or gens) on the other. TRAIL stories will be set in various locations.

Where to buy Trailing Kaiwulf