“I do believe in ghosts” — these ghosts are real #SpaceOpera #MFRWhooks 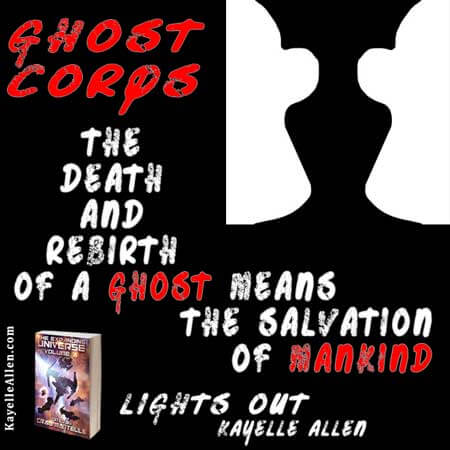 “I do believe in ghosts” — these ghosts are real #SpaceOpera #MFRWhooks

In Lights Out, a story in the Expanding Universe (Vol 4), you’re asked to believe in ghosts of a different kind. These ghosts are special ops soldiers resurrected to fight an enemy that is immortal.

I do believe in ghosts!

Twenty-four hours later, healed and at attention, Tornahdo endured a tongue-lashing by no less than the Ghost Corps Colonial Armada Commandant General. What a mouthful for such a tiny person. He wouldn’t have thought he’d rated an officer of her rank.

If a general had thousands to command, why was she slapping around a master sergeant? In the regular army, they’d berated him at the lowest level of incompetence. And what was his sin? Getting killed in battle. If you came back to life, why was that wrong?

Plus, if a soldier sacrificed himself saving a platoon, you didn’t write him up. You bestowed a medal.

Treat the regular army like this and that whole death-and-rebirth thing was never going to catch on.

While the general droned on about the expense of rebirths and the protocol for ghosts, he counted bullet holes in the fence outside the window. Sixty plus on one panel. Over forty on another. Wasted firepower. Probably a human.

Ultras tended not to miss.

“Are you listening to me, Master Sergeant?”

“Repeat what I said.”

Clasping hands behind her, the general paced. “You were inducted into the corps and promoted because you had the highest rating from a commanding officer I’d ever seen in the regular army. Now that I’ve reviewed your record, I’m wondering if he inflated your value to get you out of his unit.”

“You’ve been written up for insubordination three times. What is your problem with authority?”

“Ma’am, I have no problem with authority.” Imbeciles, yes, but that was another story.

“The death and rebirth of a ghost means the salvation of mankind. Isn’t that why you enlisted?”

“The purloined blood of an Ultra runs in your veins. Do not take it for granted. It costs the corps a fortune. Do not forget.”

Not likely. The corps reminded him daily.

The word purloined hadn’t been used in his hearing before. Now that he thought about it, how did they get the Ultra blood infusing his body? Were captives volunteering?

Surely not. Their hatred of mankind was legendary.

What did it matter? Ultras were the enemy. They deserved no mercy.

He can save mankind. After he does one important thing. Die.
Join the Ghost Corps, they said. You’ll live forever, they said. You’ll save mankind, they said. They didn’t say that to do it, first he had to die.
When Tornahdo signs on the dotted line, he puts his life into the steady hands of the mighty Ghost Corps. Three grisly deaths and three agonizing resurrections later, he’s assigned duty on the space station Enderium Six.
He’s facing his most dangerous mission yet, the very reason the corps exists.
Do they expect him to win? Fat chance. Tornahdo and his team are already dead and this mission is codenamed “Lights Out.” No, there’s more to this than he can see.
To discover the truth, he must face an unbeatable, unkillable enemy, and this time–somehow–find a way to keep himself alive…

JOIN US FOR BOOKHOOKS
Book Hooks is a weekly meme hosted by Marketing for Romance Writers as part of the MFRW Authors Blog. It’s a chance each week for you the reader to discover current works in progress or previously published books by possibly new-to-you authors. Thank you for stopping by. Please say hello or leave a note in the comments.