This page has inside and secret information for members only. 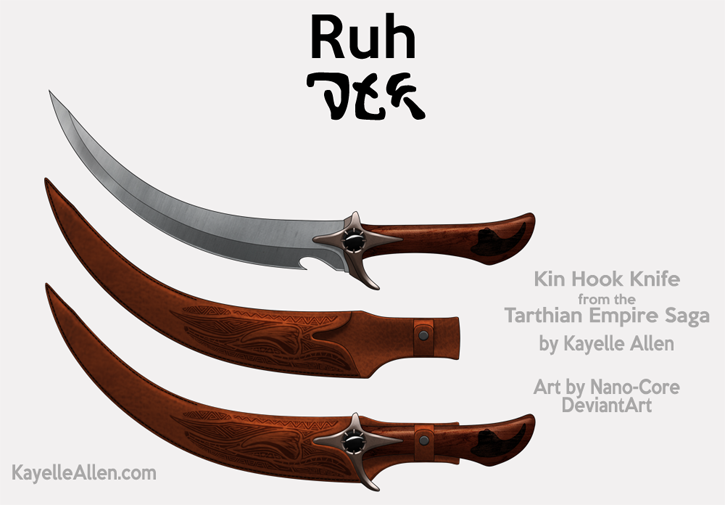 Fiercely territorial, they have been at war with one clan or another throughout the planet's history. The Tzesarki, or chief tzesar over all clans, is traditionally from the Ruh. Males marry at 15 and are not educated. Black obsidian is the Ruh gem and their symbol is a kweeoh claw.

The border between the Ruh and the Fasra is a long and winding river with wide deltas. On one side it is called the Fasra River and the other it is the Ruh. Strangers boating down its rapids have been known to get lost, looking for the very river on which they are paddling. The Ruh clan negotiated with the Tarthian Empire to locate a starport in their capitol city. Because the main transportation prior to the human's arrival had been horses, a common joke in Ruh City is that traffic stinks.

Who are the Kin

Felidae is the biological family name of cats. It seemed natural to name the Kin homeworld the same way. Although not revealed in any books yet, the Kin were created by Pietas. Known among the feline-like non-human creatures as Adel Jansaara (Saint of Silver), he was worshipped and feared as their creator. When he was exiled to Sempervia, his ability to monitor and alter their genetic makeup vanished. The Kin spent the next 10,000 years without his influence. When they were rediscovered in the 4643 TSD (Tradestandard date) by Rheyn Destoiya, Empress of Tarth. She immediately informed her twin brother -- Pietas.

Where did the Kin come from?

The modern Kin, whose name means "Pride", have forgotten their origins. They tore down all remnants that reminded them of the person who had come to their world to claim pairs of them for tribute. Statues built to Pietas were destroyed and their pieces scattered.

The tribute, unknown to them, was for experimentation. Pietas was creating an invincible army. That fact was one of the reasons he was exiled. Read the Bringer of Chaos series for the origins of his story. Be aware - he is not what he seems. Not at all.

The images below represent the various clans (aka tribes). The clan name is listed at the top, followed by the name in their world's language and characteristic font. This art was commissioned from Sci Fi Weapons Designer Nano-Core.  After Aug 8, they will also be shown on his DeviantArt page.

The Aleksay claim flame and bloodstone as their clan symbols. Their clan color is reddish-purple. Males have limited roles among their people. 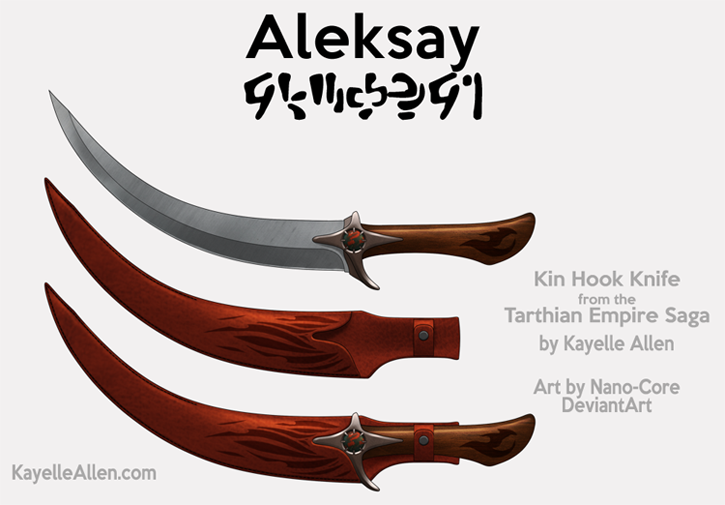 The character Izzorah Ceeow is from this clan. His story is found in the upcoming Surrender Love, Surrender Trust, and Forbid My Heart. Their clan symbols include the leaf of a kanya (similar to oak), the color light green, and the stone peridot. 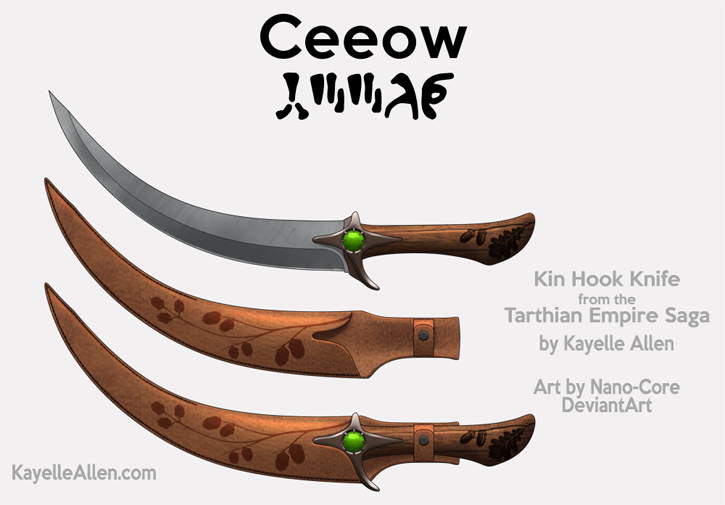 This clan's stone is pyrite (also known as fool's gold) and their color is dark yellow. They tend to be isolationists, perhaps because most of their clan territory is desert, but they are crafty and their advice is sought after in business dealings. Their symbol is the fox. 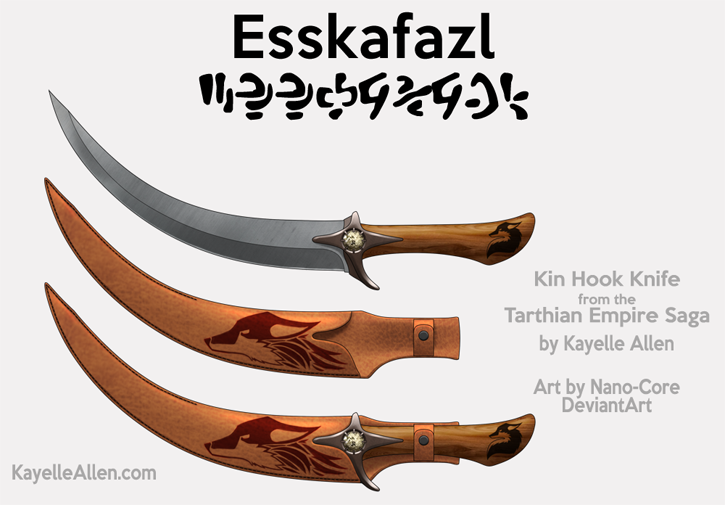 The stone called rhodinite is pink, and its texture often rough. The Falehla claim a star as their symbol. 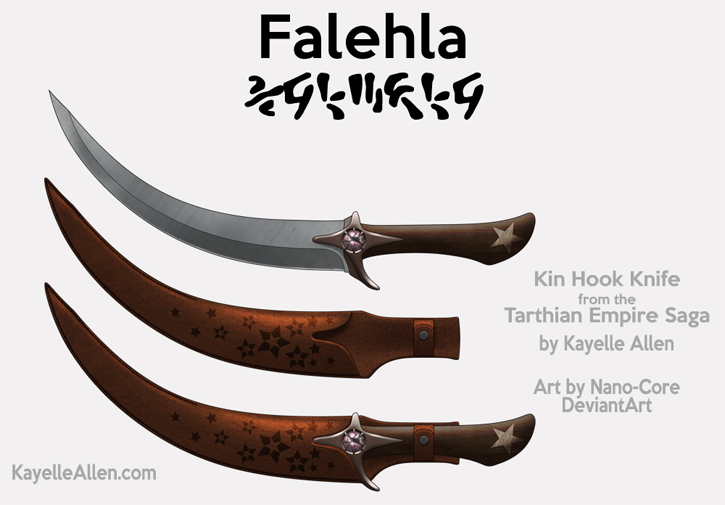 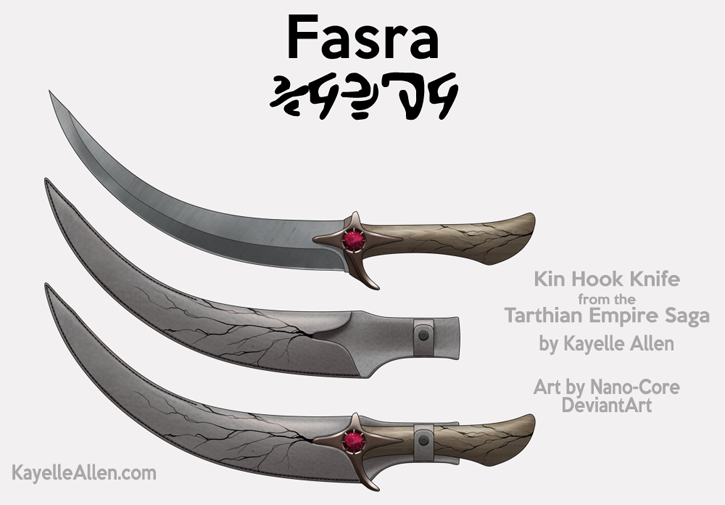 BOOKS: At the Mercy of Her Pleasure, For Women Only,  Surrender Love, Tales of the Chosen: Alitus, Tales of the Chosen: Jawk
CHARACTERS: Ruffhaus, Tovar, Ehrstahn (Stahn), Rocha, Stahndiya, Dreena, Gelina, Miliyana, Ridell, Seren, Kimathra, Kraftig, Talyn (MacGregor)
One of the oldest of the 16 clans on Felidae. They claim lightning and blood red garnet as the tribe's symbols. This clan reproduces so successfully that their females are never used as breeders. The males all have tufts on their ear tips, even after three generations of breeding with other clans. Males are not educated. Stone is the garnet. Their lightning symbol is well known and was used to designate the Kin rock group Wind and Thunder.
Long the enemy of the Ruh, they joined forces to repel alien invaders on their world -- sinister creatures claiming the right to conquer, who called themselves human...

Horses abound in this clan's territory. They are bred for speed and strength. A good bargain is said to be a "Fitzzeen Deal" since they are skilled traders. Despite their small land area, they are one of the richest clans. Males marry at 15 and are not educated. Their stone is jet. Symbol is the horse. 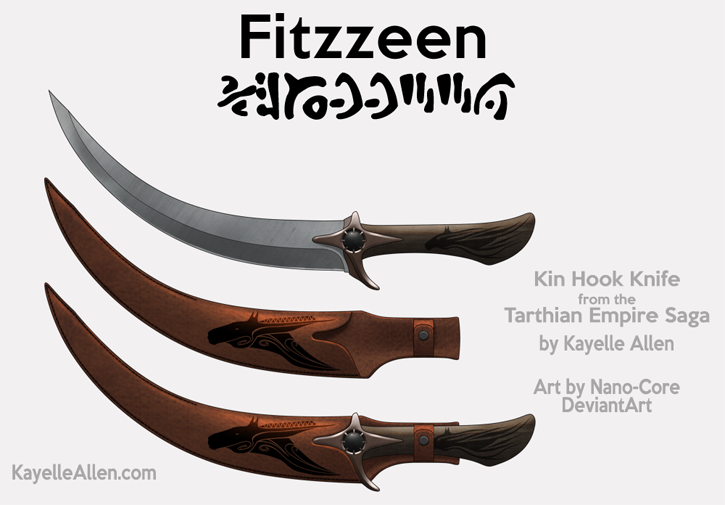 The Jhareen clan seeks to prevent males from leaving the clan by limiting their roles and education. They have a long coastline and make a good living by leasing coastal property to humans. Their stone is amber and symbol is a snow owl. 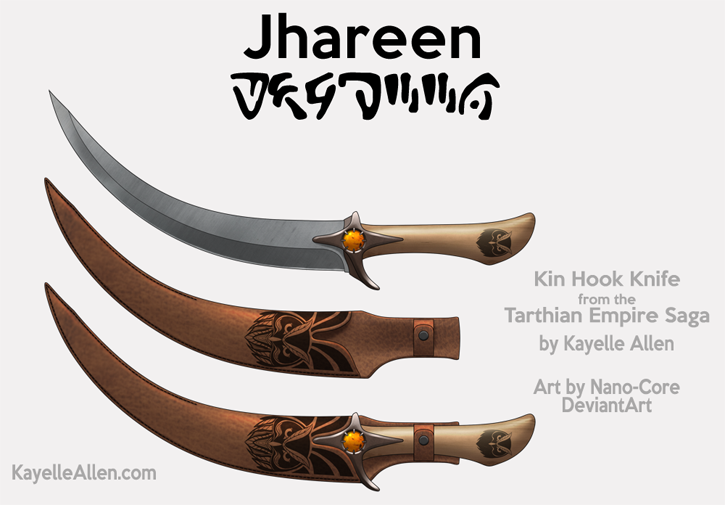 They raise elk for food and skins. Their territory is surrounded on all sides with a tiny outlet to the sea which the Koursas and Ceeow clans consider unclean: whales often beach themselves there. Males are married at age 14 and are not educated after age 8. Gem is actinolite. Symbol is an elk. 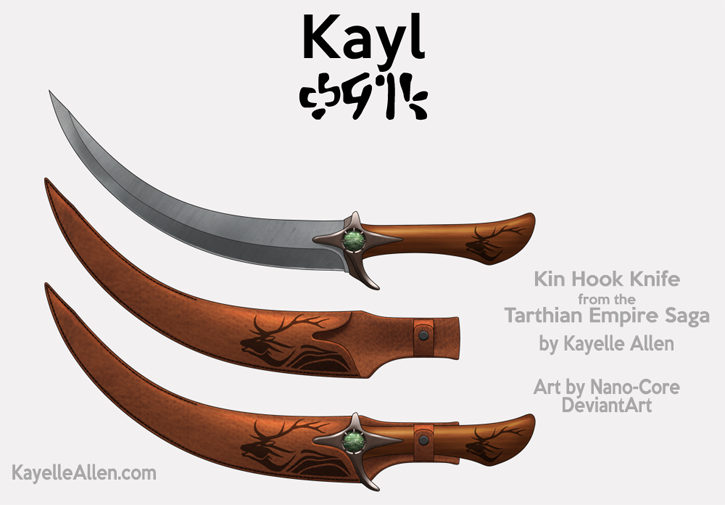 Their long coastline abuts rich forests of the Aleksay and Fitzzeen. Males are equal partners with females here and are educated until age 14. Although many are warriors and leaders, no male has yet become tzesar (clan ruler). Their gem is jasper and symbol the scythe. 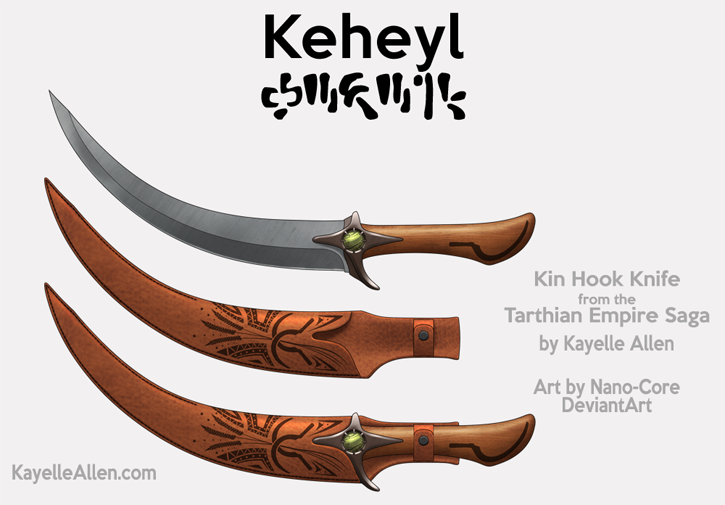 They inhabit one of the smallest areas on Felidae but are one of the richest clans. Wheat grows in abundance. Males marry at age 14 and are not educated. Their gem is yellow citrine. A sheaf of grain is their symbol. 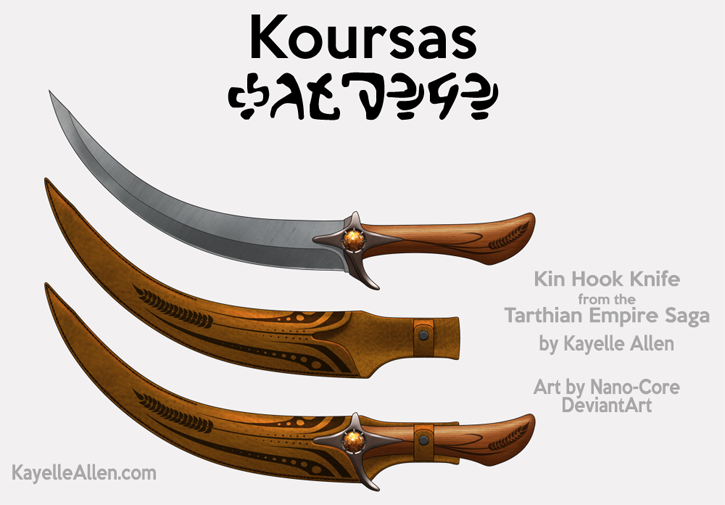 Their land is covered with ice for about 30 days each year, but rarely with snow. During that time, a hardy type of seals inhabit its eastern coast, providing the people sufficient meat to survive a long winter. Males are educated to age 6. Gem is amethyst. Symbol is clover, transplanted from the Aleksay. 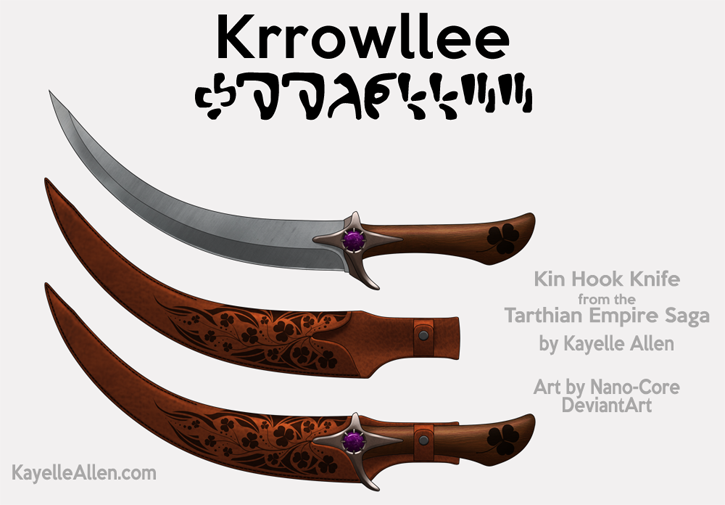 Their rich coasts and lushly forested interiors lure humans who pay dearly to hunt the deep groves and fish their coasts. Both genders undergo the Sanction of Strength and are educated together. Their stone is azurite, and their symbol the eagle. 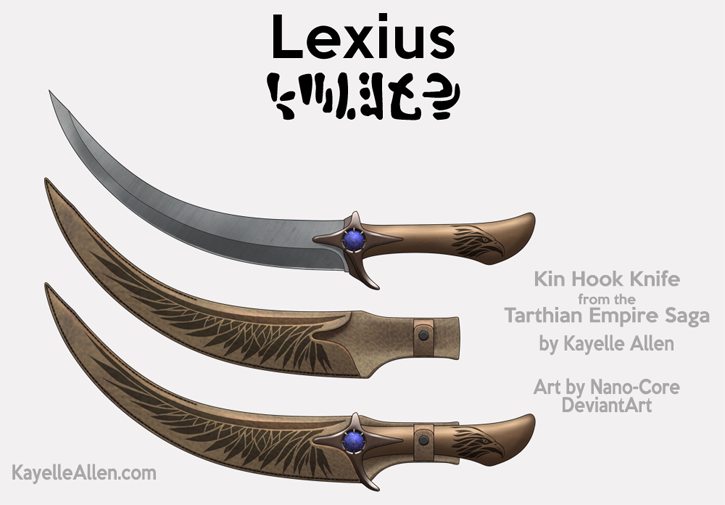 Males are educated till age 17 and do not marry until then. They are accepted as warriors by their clan. Their gem is turquoise. The clan symbol is the kweeoh. 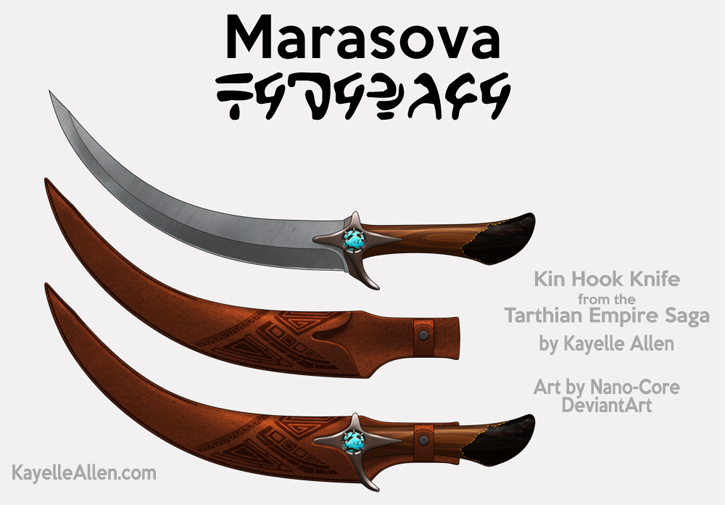 Hundreds of protected islands form the Z'fee t'Zh - the Islands of Zh. This is a coveted vacation spot for all Kin. The Zalmute are casually neutral about most things, but are protective of their islands. Males are not educated after age 6. Kyanite is their gem. Symbol is a fish. 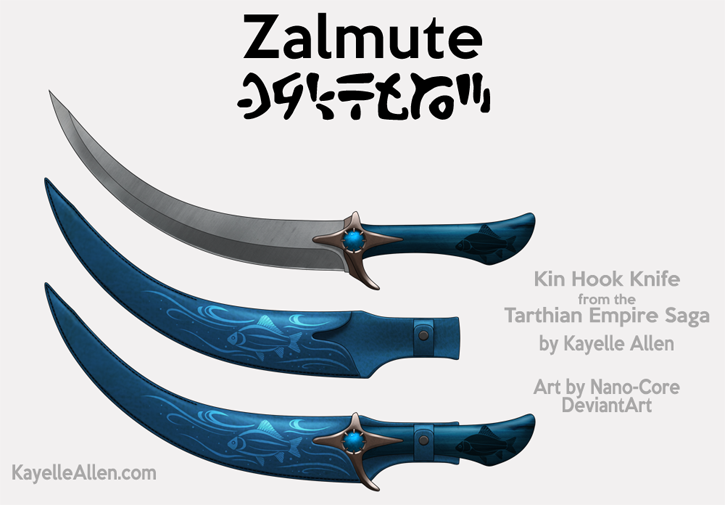 Peaceful, seafaring clan rich in fishing. Both genders take the Sanction of Strength at age 12. Males are educated until age 12 but must leave school to prepare for marriage at 13, the youngest of all clans. Stone is the sapphire, mined inland. Their symbol is a shell. 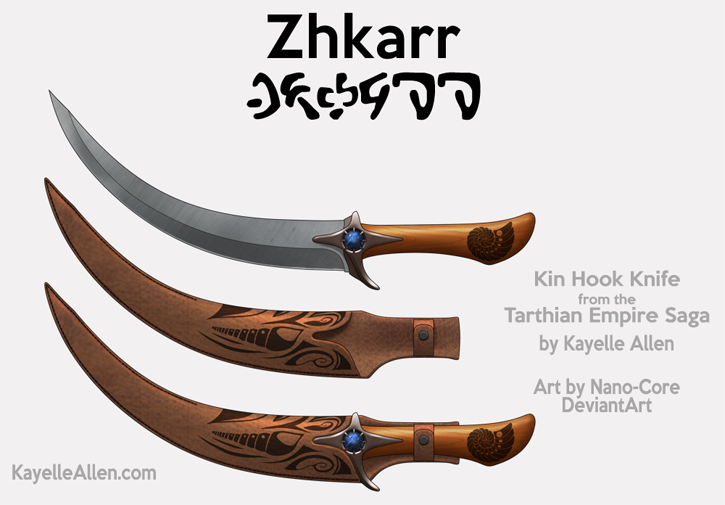 At the Mercy of Her Pleasure