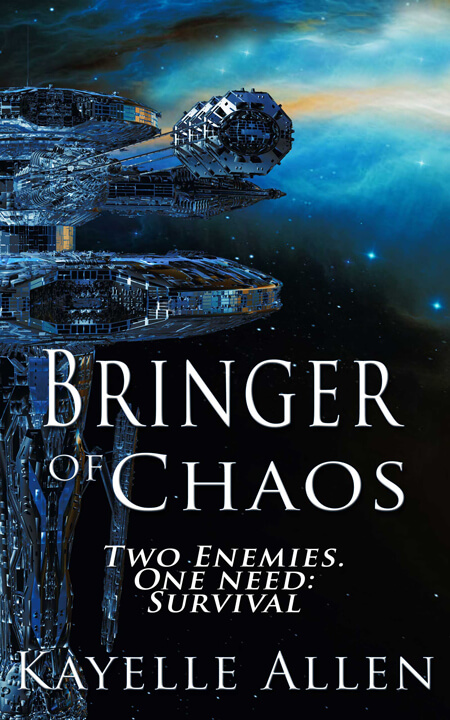 Bringer of Chaos — military science fiction / space opera with elements of humor, a small touch of romance, a ginormous black panther “kitty”, a telepathic weapons designer, one used-to-be-human, and the most dysfunctional family since forever.

Bringer of Chaos: Origin of Pietas

A captive of the people he loathes, Pietas is left for dead on the planet Sempervia. He can’t survive on his own. Six, a human soldier abandoned with him, offers food and water. Is this man worthy of friendship? Or is this another trap? Either way, Pietas must do the one thing he detests. Trust a human…
Read more and download a sample.
Universal link: https://books2read.com/u/4DovO7

Bringer of Chaos: Forged in Fire

When the immortal Pietas is marooned on a barren world with no food and few survival tools, he knows it could be worse. He could be alone. But that’s the problem. He’s not. Half a million of his people sleep in cryostasis, trapped in their pods and it’s up to Pietas to rescue them. A human abandoned with him has become a trusted friend. But before Pietas can save his people, he must reconcile them to the human and take back command from a ruthless enemy he’s fought for centuries. His brutal, merciless father. Immortals may heal, but a wound of the heart lasts forever…
Read more and download a sample.
Universal link: https://books2read.com/u/bpW7Kg

Bringer of Chaos: Watch Your Six

To save his friend, Pietas must abandon his pride, turn his back on his people, and violate a vow made in his darkest hour…
Coming Soon!

The most powerful of all the immortal Ultras, Pietas ap Lorectic rules his people with an iron fist and a heart of stone. Or so he would have you believe. The man behind the myth is a scientist, deep thinker, brilliant strategist, and passionate lover. He has shared his thoughts with few. These books are a collection of full color illustrated quotes on by the man known to other immortals as the Bringer of Chaos.
Yours free

[bctt tweet=”An exiled, immortal king, a ginormous panther ‘kitty’ and the most dysfunctional family since forever #SciFi #SpaceOpera #Pietas” username=”kayelleallen”]
[signoff]
Reach me via
email at author@kayelleallen.com
or call me 609-300-4664
(M-F 9-6 EST)